How to treat dog dermatitis produced by an allergy? Allergy in dogs is a pain; it comes suddenly and few things can calm the itching that it causes them. It can be caused from food, due to attack by a parasite, or an external agent, such as that caused by rubbing against a plant. All of them cause very similar symptoms: strong itching throughout the body. If the allergy is caused by a flea, you just have to look where he scratches, eradicate them, and treat the area, but what if it is from food?

You cannot 'remove' the allergy from a dog, but you need to understand what causes it and reduce the exposure. If he had an allergic reaction to a field trip, write down what plants and elements he may have touched and tell the veterinarian. If he has eaten something new and after a short time the scratching started, that is perhaps what caused it. In this article, we will explain how to react and what you should not do while facing a possible allergy. 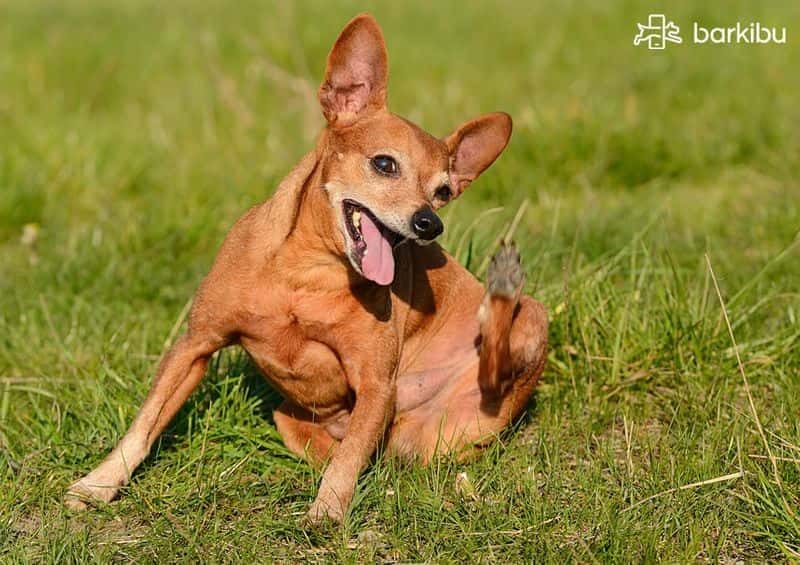 Symptoms of a food allergy in dogs, how are they?

An allergy caused by food manifests itself in the same way as any other: with itch. Anyway, this itching will not be as localized as the one caused by a flea, but it can occur in several areas: in the abdomen, on one leg and even on the face; however, is it always an allergy symptom when he rubs himself on those sites? Well, no, and here comes the problem.

An otitis or a fungal attack inside the ears will make him scratch his face and rub it against everything around him. If he has gastritis, his belly hurts, he has parasites or any intestinal condition, it is very possible that he also scratches there so that you understand that it hurts. Another reason for this compulsive scratching may be from scabies or common dermatitis.

Rubbing against other objects, bites on the legs, or scratching with their claws are behaviors that can have psychological causes, such as anxiety and stress. Also, drowsiness, adopting a reclusive behaviour, or growling too much. That is to say, we cannot play doctors and believe that whenever the body is scratched with determination it is symptomatic of an allergy, but it is not always the case.

How to know if it is an allergy

Anyway, this is not 100% effective either, because sometimes the allergy can come suddenly, even with foods that have always gone down nicely. The problem is that even if you think that two pieces of fish are the same, one can have traces of something that causes the allergy.

The way of acting is simple. Whenever you see him scratch a lot and you believe that something new has come into contact with him, go to the vet. The first thing will be to conduct a study to see which new agents have come in contact with your dog and gradually eliminate them from his life. If, in the end, we are talking about fleas, you will have to deworm and clean your home or where they were. After that, apply a set of antihistamines and pills and also some kind of special bath to submerge and calm him.

A major part of these allergies your dog might suffer is also seasonal allergies, such as humans', which occur with the change of season. You surely know the symptoms if you have ever had it: mucus, cough, moisture and tears and some redness in the eyes. Again, we do not recommend that you apply home remedies without veterinary supervision, because the redness could be conjunctivitis and a runny nose a sign of distemper.

It will be your veterinarian who will recommend what baths to prepare, what lotions to use, and how to treat your dog's disease. We know that you may be a little disappointed because we are not giving you natural and free remedies to calm your dog's allergy, but we have already seen too many cases of self-diagnosed doggies by their owners that ended badly. If he is scratchy or has a running nose, go to the vet and ask for effective medical treatment. You also have our specialists to solve your doubts.