Yoshi, my male dog mixed with maltese, has pees at home-indoors

I have a 3 year old male Morkie (Maltese/Yorkie), not neutered. 4 weeks ago, he started urinating indoors which never happens. He only does it in certain areas and in small amounts, so I thought he was marking. About 2 weeks later unnoticed his sheath/prepuce was larger than normal, especially at the end/tip. He also felt very hot (nose, ears, paws, belly). I also noticed that when urinating outside, his pee was not a steady stream like usual and he urinated multiple times in small amounts. His urinate is not dribbling, but coming out kind of zig-zagged. He started excessively licking after coming in from peeing, and there's sometimes a bit of yellowish discharge. I took him to his regular vet. His vet does not do any kind of testing, but he's been around for 40 years, so I trust his opinion. He looked and felt around, noted the swelling and that nothing was sensitive to the touch. His abdomen and kidney areas felt fine. Based on the symptoms, the vet decided it was some sort of UTI, bladder infection, or something along those lines. Doggy got an antibiotic shot and sent us home with a 10 day chewable antibiotic and a pill to help him drink and pee more. 3 days later, doggy seemed to be getting better. But by the end of the antibiotics, he was swollen, hot, etc. We did another round of antibiotics with no results. Also, just in the last few days, I have noticed his testicles are very sensitive to touch and look different, like a different shape and perhaps swollen. I groom him myself and check regularly for ticks and flees, he's never had any issue with his testicles being touched. I plan on taking him to a vet with in house testing, X-rays, etc. but it could take a bit to get him in and I'm curious to hear options. After weeks of research, I have a list of what I think the issue may be. Also I should add, he's eating fine and drinks tons of water. There is no rash, lumps, cuts, or any changes besides swelling. He sleeps a bit more than usual, but is still willing to play and chase the cat. Also, his penis is not out of the sheath and has not come out. In fact, it's very rarely ever came out.

urinary cancer
over 4 years ago
Information about Yoshi
Attached photos 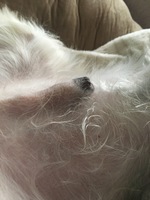 It might be a problem of the prostate or a resistance of bacteria.

I don´t know if the vet did an exploration of the prostate.

Another possibility, it is doing a cytology of the testicles.