Differences between a labrador and golden retriever, how to tell the difference?

How to tell the difference between a golden retriever and a labrador? The labrador and golden retrievers are two breeds of dog that we can easily be confused with, especially when they are puppies. We can consider both of them as excellent companions, easily tamed, due to its great degree of intelligence, and ideal as family dogs.

Although the golden and labrador may seem very similar races, it is important to know their differences and needs before we decide to adopt or buy one or the other.

Characteristics of the labrador retriever

The labrador is a tremendously intelligent and affectionate dog, both for people and other animals, which makes it perfect for the family but not valid as a guard dog, as it tends to be too friendly, even with strangers.

His great disposition to work united and his good sense of smell make the labrador a good dog to work as drugs and explosives tracker, and also as a guide dog.

It is important to keep in mind that they are dogs that need to make exercise on a daily basis in order not to become lazy because they tend to be overweight. In addition, we must control their diet because they love food.

There are three varieties of labrador according to their color: black, sand (or yellow) and chocolate. The three share the same type of hair: short, smooth and rough to the touch. It is important to brush them every day since they lose a lot of hair.

Characteristics of the golden retriever

The golden retriever is a docile and sociable dog, the ideal companion for the smallest members of the house. This race became famous in the 1990s thanks to the announcements of the brand of toilet paper Scottex, starring a mischievous puppy of the Golden breed.

It is considered a calm but very playful dog. They do not like the loneliness and need to get out and take long walks on a routine basis, if they are receiving enough attention they tend to become restless and anxious.

According to the classification of Stanley Coren, they are the 4th smarter race there is. They have a great capacity to carry out and bring objects thanks to their "big mouth" and are very agile, so, for example, playing the "frisbee" can be a good activity to keep them in shape. In addition, they love water and are very good swimmers.

The golden has long, wavy and silky hair. The name of the breed comes precisely from its characteristic color, a golden one, which may range from pale to the reddish tones.

Differences between a labrador and a golden 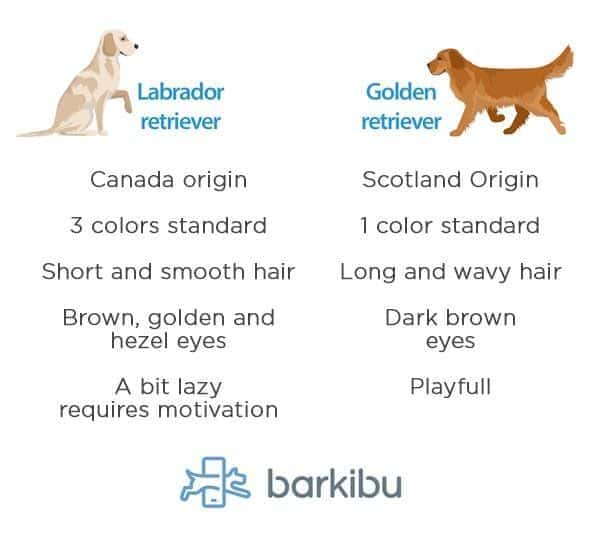 The labrador retriever has its origin in the province of Newfoundland and Labrador, in Canada, while, the golden retriever comes from Scotland.

The labrador is quieter and needs to be incited to physical activity, as they tend to the sedentary lifestyle. The golden is very energetic, they love to play, get out and go for a ride.

Common diseases in labrador and the golden

There are a number of diseases that affect both races equally:

The labrador and the retriever dogs are very loving and friendly but with some characteristics, both physical and from behavior, that differentiate them and make each race unique.

However, both tend to suffer from eye diseases and dysplasia. If you think that your dog can have any of these problems or want to prevent them, we recommend that you ask for tips with our veterinarians or make your query in http://www.barkibu.com/es/clinicas