What is otitis in dogs? Otitis in dogs is an inflammation of the ear. There are two kinds: 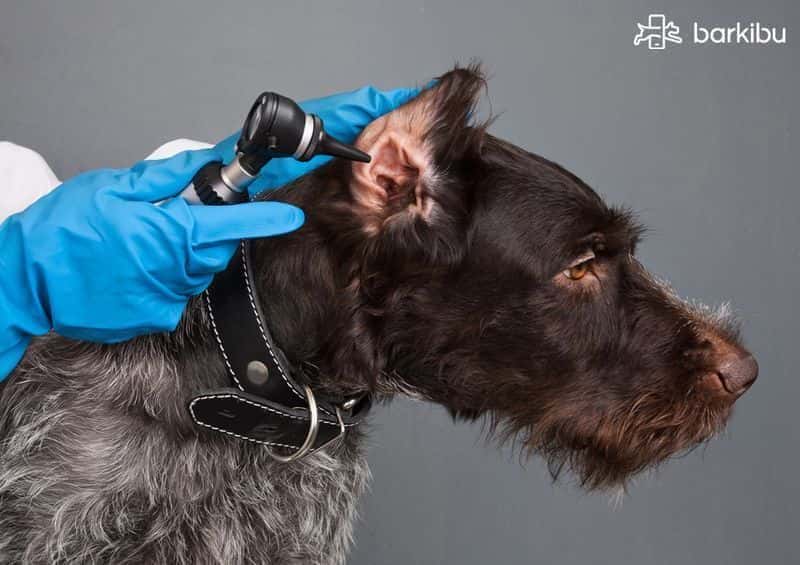 External otitis is the most common, however, it can evolve into otitis of the middle ear or internal ear if the infection enters through the eardrum.

If the tympanic bulla or the vestibular organ, two parts of the inner ear, are affected, there is a risk of nervous system symptoms arising, since the vestibular system controls balance. In addition, an infection can pass to the meninges that line the central nervous system, inflaming them, and causing meningitis.

Symptoms of otitis in dogs

We usually notice strong discomfort because the dog shakes his head or scratches his ears. In addition, in otitis externa, there is visible redness, a bad smell, and abundant and/or abnormal secretion in the ears or at the ear's entrance.

In otitis media or interna, in which the outer ear is not affected, we will not see anything abnormal, but a serious fever and apathy may arise, your dog may walk around in circles and tilt his head (vestibular syndrome), or you may detect lateral movement of the eyes (nystagmus), etc. In many cases the two clinical symptoms (set of symptoms) combined are observed.

When the animal shakes and scratches his ears because of discomfort caused by otitis, an otohematoma or internal bleeding can be provoked, that due to the ear's anatomy can not be reabsorbed on its own and surgical intervention becomes necessary. We will observe that one ear is much thicker and weighs more than the other.

Causes of otitis in dogs

Otitis in dogs is a very complex disease and there are some concepts that must be understood to comprehend its importance and why treating it is so difficult.

Causes that predispose dogs to otitis

There are a number of causes that predispose dogs to otitis. On the one hand, otitis in dogs is typical in some breeds like the cocker spaniel or the yorkshire terrier. In addition, there are anatomical problems, such as droopy ears or ear channels that are too small, hair in the ear, etc. which can also cause otitis in dogs.

Primary causes of otitis in dogs

The primary causes are what cause otitis. If we only treated the secondary causes, the animal would never be cured.

Secondary causes of otitis in dogs

These are causes that don't provoke otitis by themselves. However, if there is a predisposing cause, the disease will develop.

Perpetuating causes of otitis in dogs

Perpetuating causes are the changes that occur in the ear as a result of otitis and that make it increasingly difficult to solve: development of otitis media, calcification of the ducts, fibrosis, etc.

For example: a cocker spaniel has droopy ears, which tend to keep the ear somewhat closed, so that little oxygen enters through there. One day a spike enters the dog's ear and, despite the shaking, he cannot get it out. The spike will irritate the conduit, which, because it is closed, will allow the uncontrolled growth of bacteria and yeast. This will prevent the spike from being eliminated through shaking.

If yeast and bacteria are treated, the dog will improve, but will not be cured until the primary cause of otitis is removed: the spike.

If it takes a long time to solve the problem, the spike could go through the eardrum and affect the inner ear, producing a chronic infection which is difficult to cure. 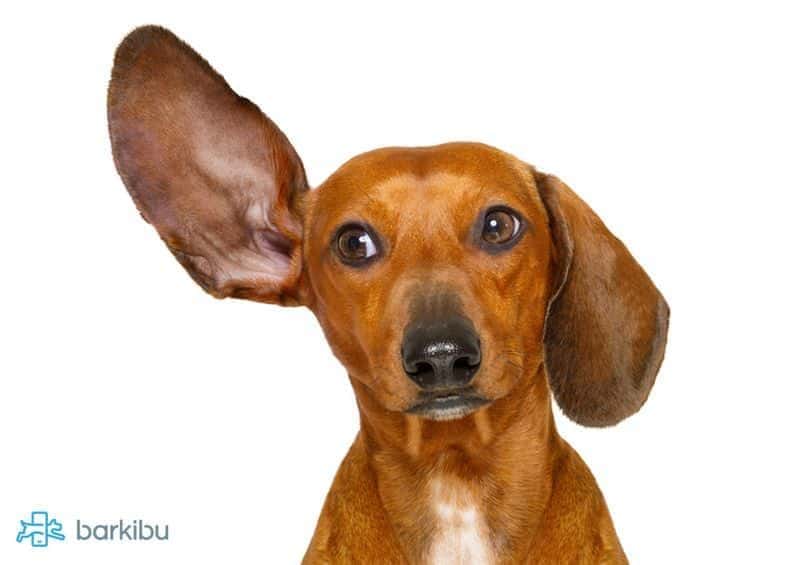 Diagnosis of otitis in dogs

To say that a dog has otitis is not a diagnosis, it only acknowledges that there is a problem. A correct diagnosis requires identifying the predisposing causes, primary and secondary, as well as the perpetuating problems to be able to carry out an adequate treatment.

If the primary causes are not treated, the otitis is not going to be cured. Secondary causes must be identified one by one. If there is a perpetuating cause, the prognosis can be reserved.

Tests to diagnose otitis in dogs

The first thing you have to do is to check up on the animal. There are generalized diseases that result in hearing problems, for example hypothyroidism or allergies.The duct should always be evaluated with an otoscope before any treatment with topical products. Sometimes, it is necessary to sedate or anesthetize your dog. Cytology allows us to know what to treat, and according to the type of bacteria that is identified, it may be necessary to send a culture.

Cultures and anti-biograms are the way to choose the appropriate antibiotic treatment as there are many infections with Pseudomonas, which are bacteria that develop a lot of resistance to antibiotics. It may be necessary to perform more expensive and complex tests such as a radiography, a CT, an MRI or an endoscopy, especially if the middle or inner ear is affected.

Treatment of otitis in dogs

The treatment of otitis in dogs is long and complex. In many cases there is no cure and preventive treatments must be carried out for life. An antibiotic treatment for otitis should never last less than 4 weeks. Treatment should be continued for one week after the cytology's results return to normal.

Ear cleaning must be combined with the use of medicine. Wax, secretions, and pus inactivate most antibiotics and are a breeding ground for microorganisms.

Cream can only be used for treatment if the eardrum has no wounds. If the eardrum is broken, the animal may become deaf for life or suffer neurological problems. This is why the veterinarian must be the one to decide what treatment the animal is to receive.

In a large percentage of cases, a combined oral and topical treatment (drops) is necessary.

In chronic cases or in conditions of the middle and inner ear, it is necessary to perform surgery.

In the case of otitis, self-medication is especially dangerous, due to the possible adverse effects that the products may have if the eardrum is damaged and due to the risk of bacterial resistance.

Summary of otitis in dogs

Otitis in dogs is an inflammation of the ear and there are two kinds of otitis; otitis externa which is the most common, or otitis media or interna. There is a predisposition of some breeds like the cocker spaniel or the yorkshire terrier to suffer from this disease, and it is seen more frequently in humid climates. Otitis externa is easier to assess, as the dog may shake his head or scratch his ears, while in otitis media or otitis interna, the dog may suffer from fevers, severe apathy, or he may move in circles or tilt his head. In any case, the veterinarian will be the one who will have to examine the dog and detect the causes to make a correct diagnosis. 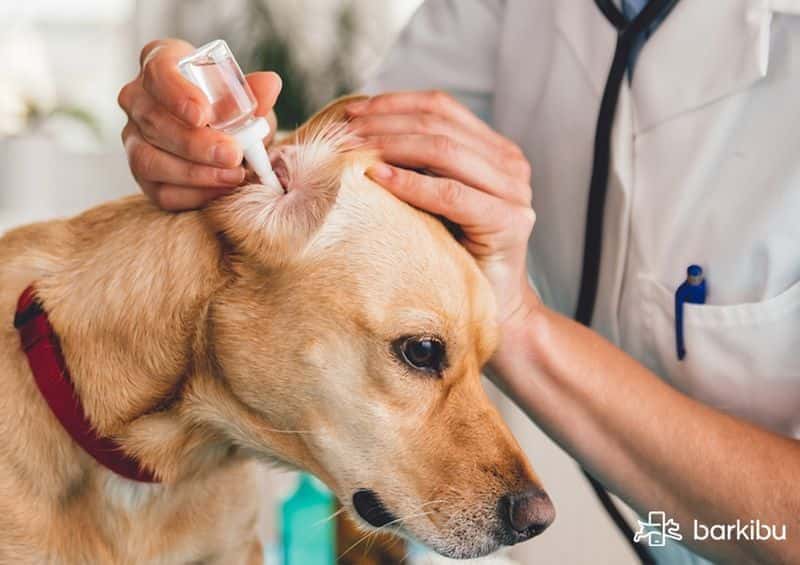 These ear swabs were designed to clean neonate umbilical cords, not to clean ears. Their use should be limited to the auricle and never enter the ear canal. The only exception is when a professional needs to collect a sample for a culture or a microscopic examination.

Otitis can be predisposed by an excess of hair in the duct that accumulates the waxy secretion. In this case there seems to be an allergic component due to the presence of erythema (redness), hyperkeratosis and hyperpigmentation (thickened and darkened skin). This is a sign that the problem is chronic and is quite typical in chronic allergic otitis.

Otohematomas are collections of blood in the auricle. The treatment is surgical, since, if the contents are emptied, they tend to fill up again and form fibrosis. They are secondary to head shaking and violent scratching caused by otitis or trauma.